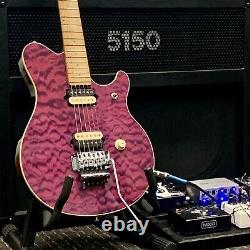 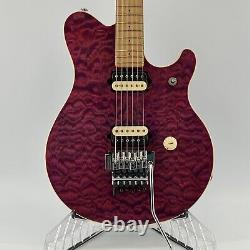 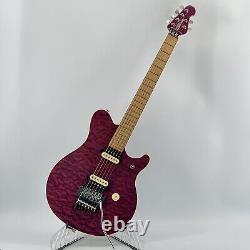 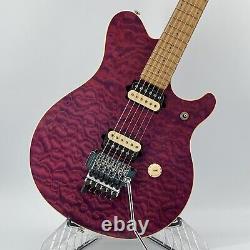 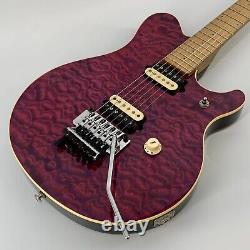 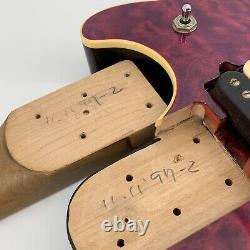 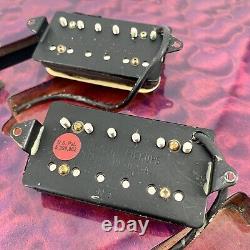 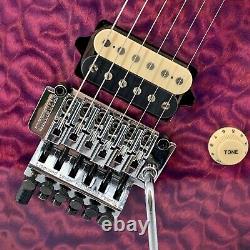 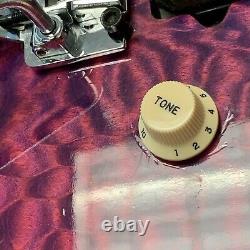 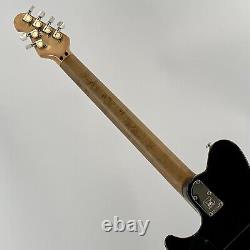 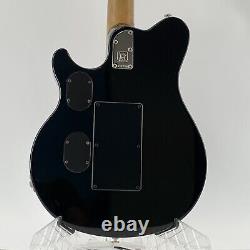 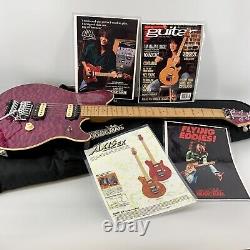 The Ernie Ball Music Man AXIS EX has to be the most obscure production guitar for fellow EVH collectors to hunt, simply because they were allocated for the Japanese market and there's so little published information about the model. I love these guitars so I have bought a bunch of them over the years in a quest to get my hands on as many as I could with the intent of documenting my comparisons to the Van Halen Signature model and providing answers to many of the questions that I have had. There is certainly a lot of mystique about the AXIS EX and a number of opinions on the internet, but here are a few notations that I believe to be true and may hopefully be helpful to anyone potentially interested. Eddie's affiliation with Ernie Ball?

Music Man was really an unbelievable move at the time simply because he appeared to have evolved overnight and away from his iconic spray painted Frankenstrat guitars to preferring such a meticulously refined instrument. After Eddie's departure from EBMM to Peavey, all of the leftover parts from the EVH Signature guitars that remained were then sent from the Ernie Ball Music Man plant in San Luis Obispo, California to their distributor in Japan (Kanda Shokai Corporation) for assembly and final setup. These guitars continued to be built with the same specifications as the Van Halen Signature model while the AXIS EX name was introduced as its value-priced successor for the Japanese market.

The Eddie Van Halen signature graphic was deleted from the front of the headstock and "Made in San Luis Obispo, California" was deleted from the back. The AXIS EX does not display any markings of the model name or "Made In Japan" anywhere on the guitar, so even those who are lucky enough to own one may not know exactly what they actually have. After all of the remaining parts from the EVH Signatures were used to build the initial run of AXIS EX models, the Kanda Shokai plant continued to source the woods and components for production through 2003. Nobody knows how many leftover Van Halen bodies and necks may have actually been sent from California to Japan, and I personally have yet to find one, so that still remains to be a myth that I continue to pursue with hopes of someday finding 1 of maybe a handful to possibly dozens.

The bodies and necks from all of the EARLY AXIS EX guitars that I have owned are indeed fantastic, but still ever so slightly different than my EVH's in a few different ways. 1 The early EX bodies do have 2 piece bookmatched maple tops but also typically have a thin quilt maple veneer layer that is stained (and is also prone to fading like the EVH). 2 The cream binding on the EX is slightly thinner than the EVH.

3 The hole for the upper strap button on the EVH is drilled at 12 o'clock if upright and the EX is drilled at closer to 1 o'clock. 4 The neck on the EX is slightly thicker at the nut than the EVH, and feels closer to the USA AXIS (which many prefer since the high E string resides so close to the edge on the EVH). 5 The application of the Hand-Rubbed Gun Stock Oil and Special Wax Blend on the neck of the Japanese EX is good, but just not quite to the level or consistent as how EBMM applies "their secret sauce" in San Luis Obispo. Ernie Ball Music Man is no longer working with Kanda Shokai, so unfortunately they are unable to provide any data pertaining to serial numbers and the overall production of these very hard to find guitars, but I will continue to explore all of the potential rabbit holes out there and always welcome any other findings.

What's really cool about the AXIS EX is that it doesn't display the model name anywhere, only the Ernie Ball Music Man logo. So, it looks exactly the same as Eddie's EBMM prototype that he played and actually even more of a replica than the Van Halen Signature models with his autograph on the headstock. VINTAGE MUSIC MAN® LOGO NECK PLATE (PRE 1998) Serial Number A90768. MUSIC MAN® BRANDED FLOYD ROSE WITH OFFSET SADDLES and GOTOH 40mm Brass Block - Many of the later EXs no longer came with the offset saddles like the EVH because the initial supply of the GOTOH GE1988T were depleted and discontinued around 1998, so the EX eventually also went with the same revision of the bridge that was being installed on the USA AXIS (GOTOH GE1996T). Original Custom DIMARZIO PICKUPS - MADE IN USA - B1 & N1 U.

Pat 5,399,802 Sticker. Original SCHALLER M6LA TUNERS with Pearl Buttons. Fantastic Player's EVH Imported From the Coast of Japan! The Translucent PURPLE top has awesomely faded some over the years and now often appears to be a cool fushia color with red undertones, depending on the lighting. There are light scratches and a number of small dings in the top that are hard to photograph, but most apparent is around the TONE knob.

The back of the body does has dings and buckle rash as well. This guitar has been played a lot of the years, so the back of the Birdseye Neck has darkened and feels fantasticly comfortable like an old baseball glove. The back of the headstock appears to have a hint of purple stain under the finish and next to the high E string tuner.

STEALTH BLACK EVH D-Tuna has been added to preserve the original look and still allow you to drop-down when you're feeling "Unchained"! (It's a little sneaky but See Photos). Original "VOLUME" Knob has been replaced with an EVH Style "TONE" Knob from Ernie Ball Music Man (Original included).

Original 500K Ohm Volume Pot is included, but has been replaced with a Bourns 500k Low Friction Pot for your Cathedral playing pleasure! Professional Eb setup with Ernie Ball 9s performed by Brendan Dezember at The Music Store in Mesa, AZ (October 2022).

(Laminated Copy) Notice that the guitar that Eddie is holding in this ad is one of the very first EBMM prototypes that were built for him and before his signature graphic was ever applied to the headstock on the production models. AUGUST 1991 GUITAR FOR THE PRACTICING MUSICIAN Magazine Cover Featuring Eddie Van Halen & Introducing His New Ernie Ball Music Man Guitar! Thanks For Looking, BYE SEE YA LATER!! This item is in the category "Musical Instruments & Gear\Guitars & Basses\Electric Guitars".

The seller is "coug5150" and is located in this country: US. This item can be shipped to United States, Canada.